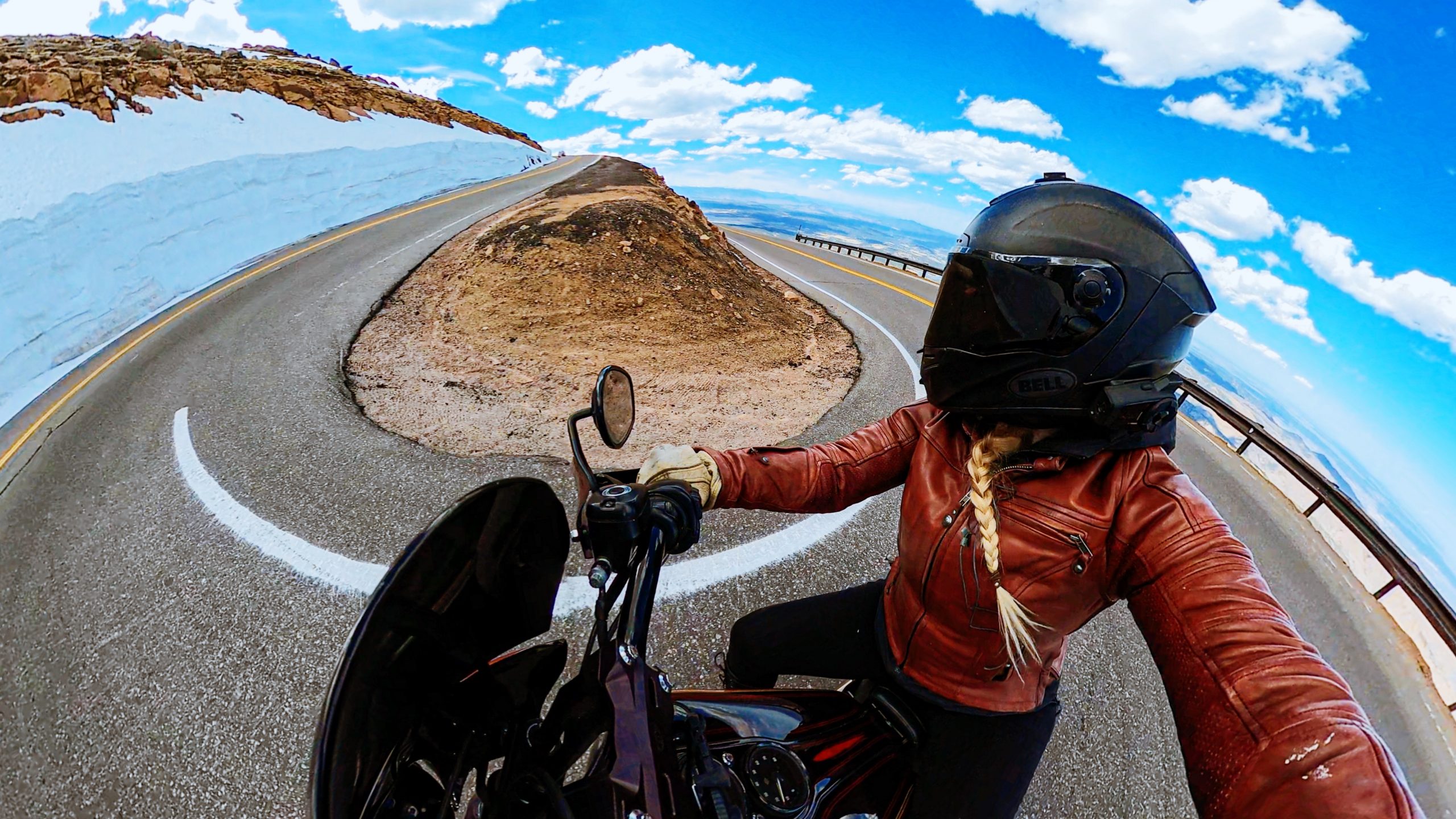 You can climb a mountain many ways. Plus, bagging a 14er is something you’re supposed to do when visiting Colorado. So, what better way to ascend the world’s highest toll road than on a motorcycle?! If you plan on riding the Pikes Peak Highway, here are a few things to know to make your trip as epic as the hairpin turns you’ll soon find yourself in.

The entrance to the Pikes Peak Highway is in Cascade, Colorado. It’s 1.5 hours south of Denver and roughly 20 minutes from downtown Colorado Springs.

Pikes Peak charges by the person versus the vehicle. So, you’ll either pay $15 or $30 depending on if you have a passenger on your bike. Fees change throughout the year, so check the Pikes Peak website for the most up to date admission fees.

While Pikes Peak is open year round with weather permitting, there are definitely times of the year that are better suited for motorcyclists. The roads may be safe for four wheeled vehicles with minor snow “sludge” left on the roads, but this isn’t a road condition you’d want to experience on two wheels.

Memorial Day weekend in May is when most high elevation roads in Colorado are opened after seasonal closures due to heavy snowfall. May through September will be the best months to ride to the summit due to less probability of snowfall, and warmer weather. Always check the weather before heading out for the day. Weather changes rapidly at high elevation and storms roll in quickly. It could snow in July in Colorado, so just be prepared! The entrance station will have information for you as well.

Weekdays will definitely be less busy than weekends. However, no matter what day you choose to go, you’ll want to get an early start. If you want to take 3+ hours to enjoy Pikes Peak (highly recommended), plan to be at the gates when they open. You’ll be able to ride to the summit before the crowds clog up the summit parking lot.

Once you get to peak hours, 10am – 2pm, the summit may not be open to all vehicles, and you may be required to take a shuttle to the summit from one of the parking lots. If you choose to go in the afternoons for “last call,” when they close the entrance gates, you’ll only have two hours to ride to the summit and back down. This will give you minimal time on the mountain. You may also run into severe winds and weather in the afternoons versus in the early morning.

Most people would say a beginner rider should not ride Pikes Peak, but I have a hard time agreeing with that. I know people who have been riding for 15+ years that shouldn’t ride this road, and I know people that have been riding three months that would summit this ride without a hitch. To put it simply: if you are not a fan of heights or hairpin turns, this might not be the best ride for you. If you are comfortable u-turning your bike around 10-15mph curves, you will be perfectly fine in the switchbacks which climb up the mountain.

The road gets difficult once you rise above the tree line. The hairpin turns are constant and there are significant areas without a guardrail, so keeping your eyes on the road is important. There are shuttle pick up and drop off areas along the highway if you’re hesitant about riding to the summit. Glen Cove sits at Mile 13 and is the last parking area before you begin to climb the steep ascent above tree line to the summit. The next stop is the Devil’s Playground at Mile 16. By this point, you’ve ridden the most technical part of the road. Remember, this isn’t the hill climb race. You won’t be going very fast. Ride within your abilities.

There is NO Gas Along Pikes Peak Highway

While the road is only 38 miles roundtrip, you’ll use far more gas than usual due to the steep grades and significant elevation gain. There is no gas in Cascade, so fill up in Manitou Springs or in Woodland Park.

Get Acclimated for the Altitude

Even if you’re from Colorado, climbing to 14,000 feet in elevation can cause altitude sickness if you’re not prepared for it. Caused by lack of oxygen to the body, altitude sickness feels like a hangover that came out of nowhere, but may also affect your balance. The air is significantly thinner at these high elevations, so if you’re not from the area, plan to spend an extra day or two in the state before you ascend Pikes Peak to acclimate. Drink plenty of water, eat your carbs, and keep alcohol and smoking to a minimum. If you feel dizzy, out of breath, or just not completely normal, don’t ride your motorcycle.

Colorado is known for its animal populations, and the Pike National Forest is home to all kinds of wildlife. You may encounter moose, deer, elk, or smaller animals such as chipmunks and black squirrels. Above treeline, keep your eyes peeled for a yellow bellied marmot or herd of mountain goats. You never know what you’ll see!

While there are numerous restaurants in nearby Colorado Springs, there’s one piece of food everyone ascends Pikes Peak for: donuts. A top secret recipe is used to make thousands of them a day at the Summit House Restaurant. And, if you try to take them back down the mountain with you, they’ll lose their fluff. Where else in the world can you say you bagged a 14er on your motorcycle AND you ate freshly fried donut goodness? That’s right. Absolutely nowhere.

Other food options along Pikes Peak Highway include the gift shop at the Crystal Reservoir (snacks) and Timberline Cafe at Glen Cove. Come hungry, or plan accordingly!

Pin this blog for later!
Or, share it on your favorite social channels.

The Best Motorcycle Roads of the Smoky Mountains (That You Can Ride in One Weekend!)

These five roads will give you the ultimate Smoky Mountain experience on two wheels.

One Day in Nashville? Here’s What to Eat, See, and Do

Riding through Nashville? Not sure what to do there? Here’s a bare bones guide on things to eat, see and do around the Music City.